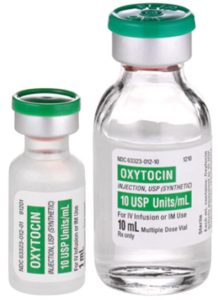 The use of oxytocin to induce or augment labour is an established, commonly used practice that underpins a lot of modern obstetric practice. This technique is a undoubtedly a useful tool which has allowed us to improve maternal and fetal outcomes. For example to induce a timely delivery when maternal illness such as PET occurs or to avoid an operative delivery for a mother when their spontaneous progress in labour is slow.

However, like most things in medicine (and life in general) there is no such thing as a “free lunch” and it is perhaps a less well recognised fact that the use of oxytocin in labour – especially at higher doses and for prolonged periods – is associated with an increased risk of postpartum haemorrhage due to uterine atony.

The incidence of uterine atony causing postpartum haemorrhage in developed countries has increased markedly in the last 2 decades – one of the important factors contributing to this is thought to be the increased prevalence and use of oxytocin during labour.

What is the mechanism underlying this phenomenon?

Recognise these patients BEFORE delivery. Anticipate and prepare for uterine atony!

In Theatre: When patients come from labour ward to theatre for a non elective caesarean during the patient assessment and the team time out specifically enquire about the length of labour & oxytocin use, duration and dose.

In Labour Ward: The midwifery and obstetric team should specifically have a discussion regarding their planned management of the third stage in patients on oxytocin infusions.

Oxytocin is still the best first line uterotonic but anticipate that it may not be effective.

In vitro rat and human studies indicate that oxytocin is less effective in myometrium exposed to oxytocin in labour, but still appears to be more effective than the other uterotonics – at least in vitro anyway.¹

Use oxytocin first but start with your highest recommended dose of oxytocin don’t wait until haemorrhage is already well established! At our institution at caesarean delivery I would give a 2-3 unit bolus (and I personally repeat this a few times every few minutes if there is haemodynamic stability) and start the 40u/500ml infusion at 250ml/hr.

In the presence of oxytocin receptor downregulation will the other uterotonics still work?

The ergot and prostaglandin F2α uterotonic drugs work via different receptors and there is in vitro and in vivo evidence that the myometrial response to these drugs is maintained.¹ We should consider using these early but don’t forget the contraindications and anticipate the adverse effects!

In these patients I personally get the obstetric team to check the uterine tone within 2-3 minutes after giving oxytocin and if the tone is poor I immediately administer one of these drugs if there are no contraindications.

1 – Oxytocin pretreatment of pregnant rat myometrium reduces the efficacy of oxytocin but not of ergonovine maleate or prostaglandin F 2 alpha. Reprod Sci. 2010 Mar;17(3):269-77.

Be prepared to use non pharmacological therapies early.

Some patients may fail to respond adequately to all the uterotonic drugs and early use of physical and surgical therapies will be reqiured. These measures are often used simultaneously with the escalating pharmacological treatments.

If we cease the oxytocin infusion will the receptors recover?

The short answer is yes. As soon as the decision to have a caesarean is made the oxytocin infusion should be ceased to allow the uterus to rest, and the oxytocin receptors to recover.

1. The association between the time from oxytocin cessation during labour to Cesarean delivery and postpartum blood loss: a retrospective cohort study. Can J Anaesth. 2017 Aug;64(8):820-827.

This site uses Akismet to reduce spam. Learn how your comment data is processed.